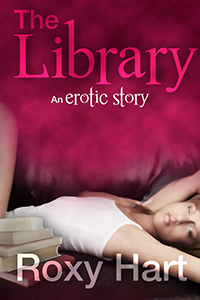 “We should just install CCTV and be done with it, that would soon stop the problem,” Marjory insisted. At nearly seventy five years old, Marjory could well have been retired and enjoying her garden or a caravan trip around the world with her husband, but instead she chose to be here discussing the copulation issue and other general day to day library duties. She’d worked in this library for forty years and I very much doubted she would leave it until they carted her out in a coffin.
“That would be illegal surely, we have no real right to spy on people. There would need to be justification, and possible fumbling isn’t enough.” Jerry seemed pretty adamant. “ Anyway, who are they really hurting?” he added with that grin of his, and Marjory giggled.
“Jerry! That’s not professional at all,” I interjected. “It’s just not proper, allowing people to get up to that sort of thing in such a historic place.” Even as I said the words I felt myself flush at the memory of my earlier voyeurism, and the things I’d got up to myself. My phone buzzed in my pocket, indicating a text message.
“Well he does have a point,” Marjory said. Oh I could tell you some stories.” They were like the kiss of death, those words, Once Marjory got started on her stories you could kiss the next hour of productivity goodbye, there was no stopping her.
“Well I think we’ll have to call an official meeting about it, with the whole team present, before we can make any final decisions,” I said. “Consider the issue parked for now. Let’s all just remain vigilant and firm.”
Firm. The word brought to mind the man’s huge erection, and a ripple of something electric fired through my belly, like an aftershock. I shook my head to clear it and retrieved my phone from my pocket as Marjory attended to a customer who’d just entered and Jerry went back to the books he’d been organising into a tray, ready for redistribution to their appointed shelves.
Dinner tonight, your place? The text message questioned. It was from Norman, my sort-of boyfriend. I couldn’t help a flash of the young eager man from the library popping into my mind again, and how vastly different he was to Norman, a thirty five year old stamp collector who lived with his mother and rarely left the house to go anywhere except here, to the library on his bi-weekly visits. I didn’t even really know how we ended up in a relationship. Norman used to come in and ask me about all the classics. He made me feel valued; coming back each week with new questions that only I could possibly answer. When he was still here at closing time one day it had only been natural to continue the conversation over dinner in the pub down the road. That was two months ago.
Since then we’d kind of fallen into a routine of eating together once a week. I’d been hoping for something more exciting to happen but so far, I was still waiting. Even when I’d put on a romantic comedy movie last week that, according to some of the girls I’d heard chatting in the library, sounded quite steamy, and plied him with wine, moving in close to him on the sofa and snuggling up, he’d blatantly turned down the clear invitation, looking at his watch and remembering that he was supposed to get home and put the bins out because if he did them too late he would disturb mummy after she went to bed. I sighed.
I was twenty-nine years old, and okay, I had never been the prettiest girl in class, but I wasn’t some kind of ogre, just plain and natural looking, and my body was slim. But so far I hadn’t had so much as a peck on the cheek from him. Maybe tonight would be different. Maybe tonight I’d try a little harder.

At 9 o’clock that evening I blew out the candles that I’d set up on the coffee table in the lounge to make it look all pretty and romantic, and carried the two plates of microwaved lasagnas back to the kitchen. I wasn’t much of a cook, and I was glad I didn’t bother going to the extra effort of even trying for Norman, since he’d just cancelled our dinner. I mean, I wasn’t under the impression that I was irresistible or anything – I did know my shortcomings – lips too narrow and hair too straight, but I always do what I say I will, unlike Mr amateur boyfriend Norman the depressing disappointment. He was meant to arrive at 7:30 but neglected to tell me until 9pm that I had been ditched in favour of a stamp. He hadn’t even bothered phoning, he’d just sent me a text – an hour and a half after we were supposed to meet, as if I was some kind of after thought. Apparently his mother was driving him to Manchester to collect a rare stamp that had just become available. That was a rather clear indication of where I came on his list of priorities, if I needed one.
Why did I even bother? I wondered. He was a complete waste of my time anyway. I scraped both plates of lasagna into the bin with a sigh, my appetite lost. No, I wouldn’t let him get me down, I resolved. I could do better. There must be a man out there for me – a man who would appreciate my intellect and my physically attributes. I would find myself a new boyfriend, I decided, as I brushed and flossed my teeth, though I had no idea where I would start. It wass at times like these I felt it would have been nice to have a close female friend – or even a group of friends maybe, like those in the rom-com movie last week. I’d never really found it easy to get close to other females though – at school and college my focused attention to my studies had cast me as a bit of an outsider. By the time I’d graduated University I was used to being a loner.
Climbing in to bed a whole hour earlier than usual – well, it felt like a day for breaking routines – I wondered about perhaps going to a social event with my sister, who was a rather lively party animal. I quickly dismissed the idea – I wanted a boyfriend, not alcohol poisoning. There must be a good way to meet intelligent but adventurous men, perhaps someone like the student in the library with the big dick.
Oh yes, I’d really like to experience some intimate time with a man like that. I’d dedicated myself to intellectual pursuits for long enough, it was time my physical needs were given equal attention. I slipped further down between my clean white sheets and inhaled deeply – it was laundry day and I love the scent of freshly laundered linen; I found it quite erotic actually.
My mind wandered to the episode earlier in the day – the situation with the couple in the classical reference section. Turning onto my back I closed my eyes, imagining what it would feel like if I was in that’s woman’s place and his head was between my legs as I leaned back against those bookshelves. How would it feel if he was licking and sucking my intimate parts as he had been doing to her? I imagined him running his hands over my breasts, then turning me around so I was looking at the books as he caressed by buttocks, gazing upon me with desire unleashed as I gazed upon the books. I loved those books and knew each one. That couple had been in a Charles Dickens section and in my fantasy I was too. I loved Dickens. Groaning slightly, I delved further into the fantasy…
I gripped the oak shelf tightly as the man bent me over and pushed his big dick into me right up to the hilt. I loved every inch as it filled up my hungry pussy, as he fucked me with it, bringing me to the edge of my senses, to the edge of everything. Then, when I could take the exquisite sensations no more, he withdrew and nuzzled my butt with that stonking penis of his, bringing a feeling of pure delight so intense I was dizzy with it.
I encouraged him, this wild adventurous carefree me, to push it inside – urging him on until I felt the head, which was well lubricated with the juices of my arousal, push gently into my tight hole. I reached out and pulled a book from the shelf – Great Expectations, and I gently held the thick leathery spine against my clit, rubbing myself against it softly as I pushed back against him and he worked his way into my arse with that beautiful cock. I loved Great Expectations, and I loved his cock.
“I loved her against reason, against promise, against peace, against hope, against happiness, against all discouragement that could be,” he growled, pumping into me with each line until he burst inside me on the final word, quoting Dickens as he made me cum like I’ve never cum before.
After some time, I came back to Earth from this erotic fantasia, to find myself spent and with very sticky fingers. I slept extremely well that night.

There are loads of my stories available on Amazon: Check them all out on my author page here:

If you liked this story, please show your love by sharing using the links below. I’d also LOVE to hear your feedback, drop me a line at hartroxy@yahoo.com